Things to Do in Pooler GA 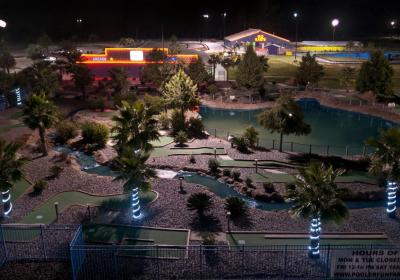 Pooler GA is a city that is located northwest of Savannah, Georgia. The city is part of the Savannah metropolitan area and has a population of 25,711 as of the census in 2020.

Tom Triplett Community Park is located in Pooler, Georgia. It offers many activities for residents and visitors of the region. Some of the features include an 18-hole disc golf course, two tennis courts, and a lake. There are also some pavilions, a jogging track, and other attractions.

The park is a good bet for families with children. In fact, it is designed with family life in mind. Among the amenities are paved parking areas, showers, and two free tennis courts.

For those with dogs, there is a dog park. Pets are welcome, and they'll be treated to treats along the way. Other features include a stocked fishing lake, wooded marsh, and a walking loop around it.

If you are visiting Savannah, Georgia, you might want to consider visiting the Mighty 8th Air Force Museum. This museum is home to many historic aircraft and contains a wealth of information about the military history of the United States.

The museum opened in 1996 and features a variety of displays. You can also visit the research center, which houses thousands of historical documents. Among the documents are diaries written by veterans, photographs and manuscripts.

The museum features several different historic aircraft, including the B-17 Flying Fortress, Bf 109G Messerschmitt fighter and a P-51 Mustang. These historic aircraft have been restored to their World War II configuration.

Oglethorpe Speedway Park has been a part of the Pooler community for over 70 years. It's the oldest track in the state and one of the longest continually operating tracks in the country. During this time, Oglethorpe has hosted some of the most memorable moments in the sport's history.

Oglethorpe Speedway Park first held a race in May 1951. The race was a stock car event. Since then, Oglethorpe has hosted several other racing events including Super Streets, GoMobile Storage Mini Stocks, Late Models and Super 4's.

Oglethorpe has also played host to the Southern Clash Late Model tour. This was a great opportunity to see some of the best and most seasoned drivers in the game.

The Fun Zone Amusement & Sports Park is an amusement park located in Pooler, Georgia. This amusement park provides a range of family-friendly fun including mini golf, go-karts, and an arcade. They also provide live entertainment and a toddler play area.

One of the most exciting things about this amusement park is the fact that they have one of the largest arcades in the area. In addition, the park is located near Tom Triplett Community Park. Its staff is courteous and accommodating, which is a bonus in any amusement park. You can also enjoy a good meal, watch some live sports, and play miniature golf.

Another impressive feature of this amusement park is its solar system, which includes the sun, moon, and stars. In addition, the park has a UV index of four.

The Tanger Outlets Savannah is a new outlet shopping mall. It is under construction and will open in Pooler, Georgia in April 2015. This outlet mall will be 400,000 square feet and will house over 90 upscale brand name retailers.

The mall will offer great discounts on merchandise. Shoppers can expect to find great savings on items like shoes, clothing, and more. You can visit the Tanger Outlets Savannah website to receive coupons for some of the participating stores. There are also plenty of food options to choose from. For example, you can enjoy a classic hamburger from Johnny Rockets or grab some sweet treats from Great American Cookies.

If you are planning a vacation in Pooler, Georgia, you might be looking for the best restaurants and bars in Pooler. There are plenty of choices, but which ones are worth a try? We'll help you with that, along with detailed reviews and photos. You can also check out some of the pet-friendly establishments in Pooler, GA.

The Metro Diner Pooler - Savannah is one of the city's oldest diners, but that's not all it has to offer. From breakfast to lunch to dinner, you'll find a wide array of signature items and homestyle meals to satisfy every taste. Plus, the location is convenient for visitors to Tanger Outlets in Savannah and the Mighty Eight Air Force Museum.